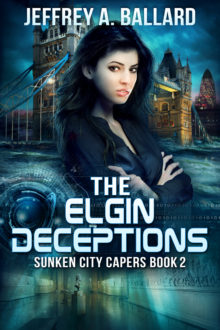 After the wake of dead bodies left in the Seattle Isles, Isa and Puo retreat to Europe to gain some distance while things settle down. But even on another continent, the Ghost of Winn haunts Isa everywhere she goes. And to make matters worse, Puo won’t shut up about it.

Determined to prove nothing’s wrong, Isa accepts their biggest job yet from a mysterious employer with deep pockets. The employer’s only condition: the inclusion of Liáng, an attractive, well-muscled operative to be embedded with their team.

As the gravity of what Isa took on weighs on them, they learn more about this mysterious employer and that failure isn’t an option—not with the kind of bill they’re racking up. Meanwhile, the authorities are closing in as Isa’s crew isn’t getting any closer to pulling off their job.

With options dwindling, it’s time to try something stupid and reckless—the Ghost of Winn be damned.