I finished it about four hours ago, a bit unexpectedly and with much relief. This sums up about how I feel about it: 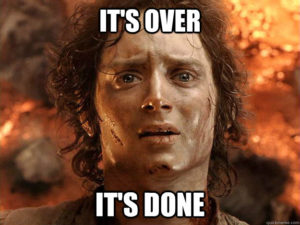 I still have probably a month of edits ahead, but for now: it’s finally done. This novel, you guys. This. Novel. Never have I had such problems and such a glacial pace before. I started it October 24, 2016 and finished today June 17, 2017 so about eight months. Feels like eight years to be honest. It came in at 68k words, but according to my tracking I wrote about 82k on it. So that means I’ve had to back up and toss at least 14k, or about 20% of the novel.

That may not be bad for some writers, but it is for me. There were three separate times I had to back up and toss out significant wordage. Always disheartening when you feel like your pace is already slow. In fact, I thought I was going to be done with the novel last week, but I had a burr under my skin about the climax. It didn’t feel right. The order of the revelations was wrong. The Thing, the Big Thing, needed to go up front, completely changing the last three chapters. I was so disgusted, I didn’t write at all for a whole day, which sounds silly, but it broke a streak going all the way back to the start of April.

Fortunately, the problems with this novel has a silver lining. I’ve already significantly edited the first 2/3rds of the novel  when wrestling with where to go, so the editing process shouldn’t be too painful. I still don’t have a publication date, but hopefully next time I’ll have a better handle on how long the editing process will take and will be able to give an estimate on when it’ll be released.

Into the editing trenches!