The gears of publishing were not as rusty as I feared! It was kinda like riding a bike, you’ve never really forgot even if the start is a little wobbly. So here it is, the last and final book in the Sunken City Capers series: The Cleaners’ War, Sunken City Capers Book 5. And since it’s been five years (!) between book 4 & 5, book 5 includes a “What you need to know” section that summarizes the key details in the series before the start of book 5. I hope you enjoy it! 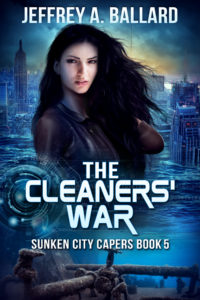